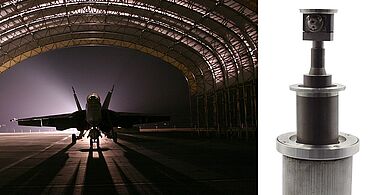 IWMA members like VID Fire-Kill offer a variety of fire protection solutions using only water making the technology safe for people as well as the environment.

The FIREKILL Model F102-1 is a low-pressure water mist telescopic pop-up nozzle specially developed for the protection of aircraft hangars. The nozzles have been installed in NATO hangars for fire protection of F16, F35 and Boeing AWAC aircrafts.

There are several fire suppression options to protect large hangars, most of which involve big fire pumps, foam systems and sprinkler systems with large design areas.

Water is the oldest, most widely used and universally available firefighting agent known. It is non-toxic, environmentally friendly and, in addition, has superior fire protection capabilities when compared to other agents.

VID Fire-Kill’s Model F102-1 is a water-based technology that does not make use of environmentally harmful chemicals. The solution offers fire suppression without filling the hangar with foam. The nozzle system has been tested to the highest level by Defence Safety Authorities in several countries and has been installed in NATO hangars for fire protection of F16, F35 and Boeing AWAC aircrafts.

The nozzles are installed embedded into the hangar floor, flush with the surrounding surface. This protects the nozzles in standby position but enables them to perform as needed if a fire occurs. Once pressure is added to the nozzle pipes, the nozzles will elevate from the floor and spray water mist into a 2 by 4 metre area.

Low water consumption and the non-use of firefighting foam makes this water mist systems environmentally friendly and harmless to people.