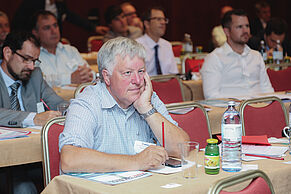 At the end of January, Erik Christensen (Novenco) left the IWMA board of directors after having been a member for more than ten years.

Erik has worked for Novenco, a Danish company based in Odense, and his last position there was that of a technical director. The reason for his withdrawal from the board is the closure of Novenco.
The members of the IWMA board would like to thank their colleague for his work and contributions. Since Erik will now end his career, the members of the board wish him a happy retirement and also all the best for the future.
Before his last day on the board Erik gave us an interview:

Q: What was the work on the board like for you?

A: In the beginning there were a lot of things to attend, the board was smaller and the administration was not so effective as today. But it has been a pleasure to be part of the development of the organization and also, we have at least to a certain degree, succeeded in getting water mist accepted as an alternative to sprinklers etc.

Q: How have the times changed for water mist in recent years from your point of view?

A: I started working in water mist in the year 1999 and joined IWMA, if I remember correctly, two years after when the conference took place in Hamburg. At that time, it was difficult to even make a statement, in particular when it came to land and industrial applications. Thanks to the regulations in place then, water mist was slowly more accepted in the marine sector. It is now very different than in the beginning even though it is still difficult to get on the bidders list sometimes.

Q: What will you be doing in future?

A: I still work as an adviser for DMA, the Danish Maritime Authority, and Danish Maritime until the end of October. And for the time being I will continue being the IWMA representative at IMO, the International Maritime Organization, and EMSA, the European Marine Safety Agency. Since I have reached the retirement age I may do just that afterwards: retire!