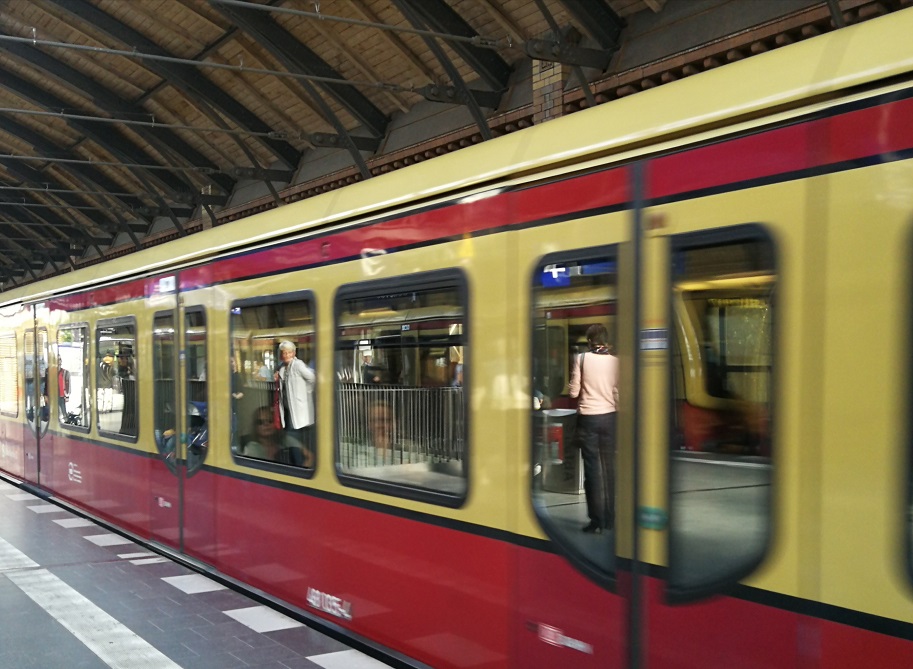 Speakers are listed in alphabetical order within the different sections. The abstracts will be availablle until the the first day of the conference (please click "abstract"). The presentations will be published on day two of the conference. There will be a password protection for the first six months after the event. The password will be made available to delegates and members of IWMA. To read the presentations, please click on the speaker's surname and enter the password! To be put in touch with the authors, please check the last page of the presentation (which should include the speaker's contact details) or contact the IWMA office in Hamburg!

The Annual International Water Mist Conference revealed not only an increasing uptake for the technology in some applications but also just how much more untapped potential lies ahead.

Water mist is becoming the technology of choice for protecting urban mass-transit environments and is also increasingly being used for incident response through the power of turbines, delegates heard in London in September 2018.

The benefits of water mist for the protection of underground mass-transit facilities were presented by Ruediger Kopp of Fogtec through an ongoing project in Budapest, Hungary, where works are currently under way on metro Line 3.

The characteristics of water mist lend themselves well to this application and indeed water mist installations have been used in underground stations for nearly two decades.

Fire protection in underground mass-transit facilities requires a holistic approach because the firefighting system is only one part of a solution that also includes smoke extraction, fire cooling to aid evacuation as well as clearly marked emergency exit routes. Water mist is regarded as advantageous because it rapidly cools a fire to create a safe environment whilst also reducing the amount of smoke requiring extraction.

The City of Budapest operates four metro lines, including one of the oldest in the world which was opened in 1896. In the 1970s Lines 2 and 3 were added. In 2014 a fourth line was added, resulting in a total of 40km of underground network and 52 stations.

Having considered the economic losses that the interruption of rail flow would lead to, in 2000 the operator reviewed fire protection in all lines, and particularly Line 1, which was still operating older vehicles from Soviet times. The risk assessment was carried out using a holistic approach that included evacuation, fire detection, firefighting, smoke extraction and –last but not least – a life-cycle cost evaluation.

A high-pressure water mist system was favoured due to its high capacity for cooling; the low volume of water required; and the low water-damage potential.

However, key for the uptake of the system was that a full-scale fire test be carried out to prove that it could indeed do the job, whilst not causing short-circuits in the electrical equipment. “It also was important for them that the same technology was used in all risk areas, including those where a gaseous extinguishing system would normally be used,” said Kopp.

Protected areas would not just include entrances, escalators and platforms, but also cable tunnels and equipment rooms. “Also important was that a fire along the entire length of the platform could be suppressed, in the case of a train arriving on fire.”

A test was devised consisting of a 20m-long mock up comprising a rail track and underground train. The test was designed to account for the major fire risks, namely a fire in the drive unit of the train; cable fire underneath; and fire in a machine box. The acceptance criteria were based on VDS 2728 standard, which describes survivability conditions for people to self-evacuate and specifies a temperature limit of 65C. The water-mist suppression system developed consisted of nozzles positioned along the floor between rails, spraying upwards, but with no direct impact of water mist on the fire. The test fuels were diesel – to simulate ruptured hydraulic or lubrication pipe – and plywood.

Following the success of the test, where all acceptance criteria were met, nine stations in two metro lines were fitted with the system, followed by a further 10 stations on the new Line 4, in addition to the control tower, train depot and service area. Currently, the first six metro stations of Line 3 are being fitted with the system, and more are expected to follow in the next few months.

“On Line 2 there was an accidental discharge triggered by the alarm system; it was ascertained that the discharge of water mist did not create panic and people could be safely evacuated,” noted Kopp, adding that this incident helped to reassure the operator regarding the implementation of water-mist technology.

Francesco Fritz of EMI Controls presented some of the results of a fact-finding exercise regarding real fire incidents where its water-mist turbine technology had been used. 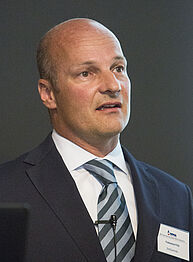 Water-mist turbine technology combines the power of water-mist’ small droplets with a turbine, enabling the mist – which may contain an additive such as foam - to be projected 70m or further. The benefits are identical to water mist on its own; quick knockdown; reduced volume of foam; gentle application.” Our approach is to reduce the water consumption and use water mist to increase the efficiency of water,” said Fritz.

The technology may still be relatively young, only three to four years in the market, but in this time not only has it been installed in petrochemical facilities around the world but has also been used to extinguish numerous fires. “We got to the stage of realising that in the time the technology had been in the market, some people now had more information, knowledge and experience of its capabilities than we did,” said Fritz, adding that first-hand information had been gathered from over 30 incidents.

Since October 2017 an unnamed European power grid company has had a water-mist turbine mounted on a robot to protect an electric transformer substation. The turbine is used to protect equipment that can carry up to 220Kv, and which carries up to 60 tonnes of cooling oil. “There was no incident, but they told us the two most important challenges were the electrical tension and the oil, where the benefits of the water mist are that electrical conduction is theoretically not possible and there is no risk of an oil explosion. Of course there can be a residual risk, as it is still water, but this risk is solved by using a turbine robot so the user is at a safe distance.”

Details were gathered, however, about a fire that occurred at a chemical production site in Germany involving a corrosive flammable liquid. Initial extinguishing attempts were just moderately successful, but the fire was dealt with in minutes with the water-mist turbine, even though the leakage involved a chemical that reacts violently in contact with water. “The fire brigade commander said that the robot was able to get closer to the hot spots, thanks to the camera system, whilst allowing the operator to stay 300m away.”

During a major fire in a recycling centre in May this year in Carinthia, Austria which involved 150 firefighters, the turbine was used to put out the fire following an initial surface attack. “The fire was still continuing to burn under the waste, so the entire waste mound had to be shifted, shovel by shovel, and doused with a mixture of water mist and foam using the turbine,” said Fritz.

The final case study presented by Fritz was a tunnel fire in Styria, Austria that happened August 2016 and involved a burning bus inside the tunnel, resulting in temperatures of around 1,000C as well as large amounts of smoke. The robot was used for damping down operations and to cool down the infrastructure. “The water mist turbine technology is being used by the fire brigade as a safety device that enters first, lays down the smoke and assists with smoke ventilation. Once the turbine has gone ahead and cooled the temperature, the crew can go ahead,” he said. One of the learning point for EMI, added Fritz, were the issues associated with laying hoses for the turbine over long distances in such aggressive environments.

Yoon Ko of the Fire Safety Unit of National Research Council Canada presented the results of the evaluation of a hybrid fire extinguishing system consisting of high-pressure water mist and aerosol for the protection of engine rooms in marine environments.

An aerosol system is a gaseous fire extinguishing system that only requires a canister to be installed in the ceiling of any room. Once activated it generates ultra-fine aerosol particles which interfere with the free radicals of the flames, terminating propagation of the fire and providing quick extinguishment. 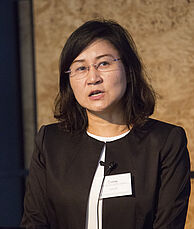 Ko’s research aimed to find answers to a number of questions, such as: how does water mist interact with aerosol particles? Will the mist scrub the aerosol? Would a hybrid provide the benefit of both systems? What should be the best activation sequence?

After going through the test results in detail, Ko presented the conclusions. The new hybrid system did indeed provide the benefits of both the high-pressure water mist and aerosol systems. No significant scrubbing of the potassium nitrate aerosols were detected by the water mist. And, in most cases the hybrid system was slightly more effective when the water mist system was activated first, or at the same time, as the aerosol one.

“Future study is required to show that a hybrid system is feasible and effective. High-pressure water mist and aerosols require different design specifications, and one of the concerns is that aerosols require air tightness in an enclosure. Another thing is that an enclosure will experience pressure changes, particularly with the activation of aerosols, and then again after activation of water mist, when a sudden pressure drop will be experience. So there must be some design element to deal with these pressure issues,” concluded Ko.

Speakers are listed alphabetically within the different sections. The pdf-files of the presentations and papers will be made available for IWMA members and attendees after the closure of the conference!Please click on the surname of the speaker to open the pdf-file.The pasword will be liftged six months after the event. 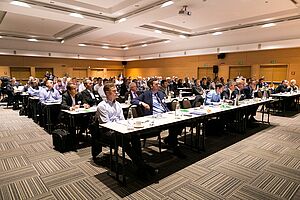 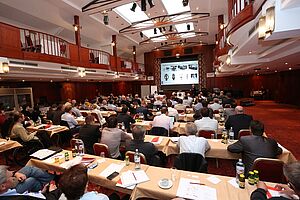 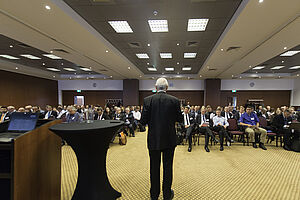 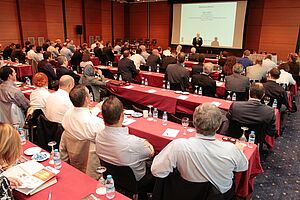 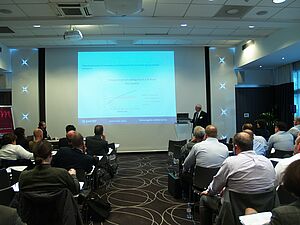 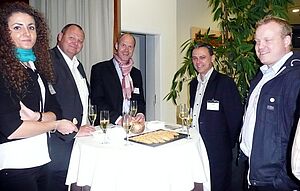 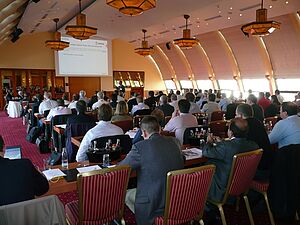 ... the annual IWMC in Hamburg 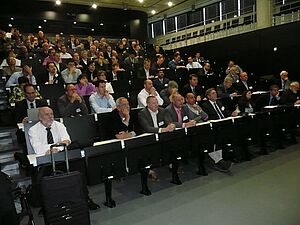 The IWMA audience is listening ...